What do you get when you link blue, yellow, black, green, and red circles in a W formation?

The Olympics needs no introduction.  Odds are you watched the London Games.  NBC broke US ratings records in 2012, as more than 219.4 million Americans tuned in, an average of 31.1 million viewers per day.  In the UK, it’s estimated 90% of the country watched for at least 15 minutes.  The Olympics’ popularity is not exclusive to Anglophones.  The 2012 Summer Olympics saw 10,568 athletes from 204 countries compete in 302 events across 28 sports.  It transforms the likes of Michael Phelps and Usain Bolt from relative unknowns into international icons.  From Wall Street’s monitors split between market-movements and beach volleyball, to the Empire Tavern in Auckland that’s full at 8am for the finals of the 100m Freestyle, to this village in Africa (pictured below) huddled around one TV to watch 8 men run a race that lasts less than 10 seconds, the Olympics is the world’s premier forum for expressing nationalism through sportsmanship.

With this in mind, it’s no surprise all 28[1] Olympic sports want to stay and those outside the rings want to do a double-twist-somersault into them.  Gold medal matches and podium ceremonies springboard lesser-known sports, providing them with both exposure and seed-money.  The International Olympic Committee (IOC) allots 90% of its revenue towards growing its sports.  For a niche-sport looking to expand its base, the prospect of global exposure and an IOC stipend inspires hope.

For these reasons, the World Squash Federation (WSF) has pursued an Olympic bid for over a decade.  In 2012 and 2013, the squash community united in pursuit of a spot in the 2020 games, registering more than 124,000 likes on Facebook and with its ‘Back the Bid’ YouTube clip receiving over 153,000 views.  Nothing can advance a sport like the Olympics, and the squash base knows it.

Squash’s case is strong.  It’s played in 185 countries and has established professional tours for both men and women.  Unlike Table-Tennis, for example, which is dominated by one country (China), squash is a truly international game.  Of the top 10 men and women in the world, 7 are British, 5 Egyptian, 2 Malaysian, 2 French, 1 Irish, 1 Spanish, 1 Indian, and 1 Kiwi.  Not one waves an American, Russian, or Chinese flag.[2]  Gold, silver, and bronze would go to countries that cherish every medal they get.

Further, a gold medal would be squash’s most coveted prize.  In the ‘Back the Bid’ YouTube clip, Nicol David, the #1 woman in the world, says she would happily trade all 6 of her world titles for an Olympic gold medal.  In other sports, an Olympic medal is a secondary achievement.  In Golf, a green jacket outranks Olympic gold, and, of course, the World Cup outranks everything in Men’s Soccer.  The IOC must know that a major reason the Olympics is so special is the athletes in less-marquee sports wait 4 years for a shot at glory.

To bolster its case even further, in the last 3 years squash has turned its biggest knock into one of its strongest selling points.  That is, it is now extremely televisable.  The requisite lunging, twisting, and cardiovascular fitness impressed Forbes enough to rank it the healthiest sport on the planet.  It is often compared to chess, as the sport’s strategic element infuses drama into every point.  Further, it wouldn’t require many resources relative to other sports.  It would account for just 64 athletes (32 men, 32 women) and two events.  As a bonus, it could be played in the country’s most scenic area, which is perfect for another of the Olympics’ ambitions: promoting tourism in the host country.  Glass courts have been set up and tournaments have been played in front of the Pyramids (pictured above) and inside Grand Central Station.

Achieving ‘Olympic Sport’ status is more difficult than it used to be.  An ‘Olympic Sport’ is defined as “All sports sanctioned by one international sport federation.”  Swimming and diving are different sports, for example, but are c

onsidered one sport by the IOC because the International Swimming Federation oversees both.  The Olympics started in 1896 with a core of nine, growing steadily until 2000, when the IOC capped the number of sports at 28.  The number of events was capped at 300 and the number of athletes at 10,500.  The latter two have proven to be soft caps, as the London Olympics boasted 302 events and 10,568 athletes.  28 sports is a hard cap though, and, currently, there are exactly 28 Olympic sports.  This means a new sport can be voted in only after one of the current sports has been cut.

Since this system’s inception, just one sport has been removed.  In 2008, the IOC eliminated baseball/softball from its program and replaced it with golf and rugby sevens.  In February 2013, the IOC cut wrestling only to vote it back in seven months later.  In the midst of the IOC’s tango with the International Federation of Associated Wrestling Styles, squash was manipulated more than anyone at the dance.  Understanding why requires a review of events leading up to the IOC’s decision to reinstate wrestling:

In February 2011, the IOC shortlisted 7 prospective sports to be added to the 2020 program.  On the list were karate, roller sports, climbing, wakeboarding, wushu, baseball/softball, and squash.  Two years later, in February 2013, after it was cut from the games, wrestling joined the mix.  In May 2013, the IOC voted to reduce its list of prospects to three: baseball/softball, wrestling, and squash.  Of the three, Squash was the only one that had not been recently voted out of the Olympics.  Salvation was within sight!  Why would an organization add something it recently eliminated?  By this logic, squash was the choice.  However, when judgment day arrived, baseball/softball received 24 votes, wrestling 49, and squash 22.  Squash had been asked to the dance, took a trip to the barber, and bought a new tuxedo, all, it discovered later, to make an ex jealous.   How is a new sport supposed to join the Olympics if the IOC simply adds the sport it had removed in order to create space for a new one?

In reality, though, squash was doomed the moment wrestling was voted out.  When considering Olympic Wrestling, an astute audience might remember Rulon Gardner’s unlikely triumph.  The common viewer, however, thinks of Hercules grappling with lions.  Wrestling is the epicenter of Olympic folklore.  It’s not an original Olympic sport, it’s the original Olympic sport.  It was never going to be removed, nor should it have been.  Squash had a compelling case, but when wrestling became a competitor, squash and the other prospects were doomed. 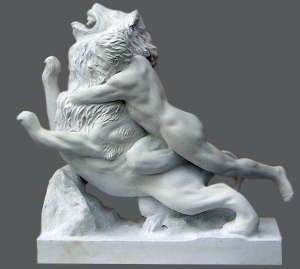 With wrestling’s sanctity in mind, why would the IOC even toy with the idea of eliminating it?  This chart separates Olympic sports into 5 tiers based on popularity among viewership.  Group A includes the cornerstone sports: athletics, gymnastics, and swimming.  Wrestling was in Group D along with archery, canoeing/kayaking, equestrian, fencing, handball, field hockey, sailing, taekwondo, and triathlon.  Wrestling is neither viewer-friendly nor a source of revenue.  However, there is a sport that ranks even lower by both metrics.  Alone in Group E[3] stands Modern Pentathlon.

What is Modern Pentathlon?  It’s a sport created especially for the Summer Olympics and was instituted in the games in 1912.  It was designed to simulate the experience of a 19th-century cavalry soldier behind enemy lines.  Competitors ride an unfamiliar horse, fight with pistol and sword, swim, and run.  It’s cool for a Civil War re-enactment, but, if the ratings can be trusted, it’s not exactly what the sporting audience wants to watch.

So why was Modern Pentathlon not nixed instead of wrestling?  The Guardian and most other media sources give two reasons.  The first is that the IOC wanted to punish wrestling for failing to modernize and become more viewer friendly.  The IOC never intended to remove wrestling from the Games.  The cut was just a scare tactic.  And it did just that.  It was a complete surprise.  Before the vote, taekwondo and Modern Pentathlon were the sports presumed destined for the gallows.  The vote jolted the wrestling world, spurring a complete renovation.

The second reason the IOC opted to ‘scare’ wrestling instead of actually eliminating a sport, The Guardian explains, is family politics.  Juan Antonio Samarach Jr., the son of the former IOC president, marshaled a furious campaign to retain Modern Pentathlon.

Squash is not in the Olympics, one could deduce, because the IOC wanted to shock the wrestling body into modernizing its sport and because the former IOC president’s son likes Modern Pentathlon.  This should be unsettling to more than just the squash community.

The Olympics have always been a symbol of integrity and moral superiority.  It disassembles competition and keeps only its purist parts.  It transcends not only international boundaries, but also the boundaries that constrain every-day life.  From the 1968 Black Power Salute to Kerri Strug’s perfect landing, the Games inspire the world’s citizens, creating archetypes for words like ‘courage’ and ‘champion.’

Such a reputation comes with a

n obligation to behave in a dignified way, something the IOC failed to do when it promised to add a new sport to its program and, instead, used this promise as leverage to scare one of its current sports into modernizing its program.  Through such deceit, the IOC defiles the very values that make the Olympics great.  Simply put, the IOC wielded a power advantage.  What can a sport like squash do except redouble its efforts and hope the process is cleaner for 2024?

For the squash community, shifting focus to 2024 can only happen once it recovers from the 2020 slight.  The most difficult losses, every squash player knows, are the ones stolen by the referee.

Until the IOC addresses this issue, the squash community’s answer to the original question—what do you get when you link blue, yellow, black, green, and red circles in a W formation—is not an event that happens every 4 years that unites the world.  It’s merely the first letter of the first word of one question that still nags, even though we know its answer: What happened?

[2] In fact, the best American in the 2020 games would likely look like this.

[3] Golf and Rugby are in Group E because they were not in this last Olympics.  Whether or not they merit the classification is yet to be seen.