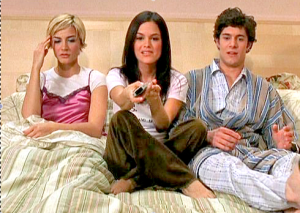 Watch that clip. It’s absolutely beautiful. Teenage television and young love at its finest. This scene solidifies Seth and Summer’s romance. Look at 1:27 in the video. It shows Anna, the girl Seth originally chose but then broke up with because of his feelings for Summer, looking on in helpless defeat.

Ladies and Gentlemen of the jury, this post examines the most formative, and arguably, most heated debate of our generation. We all watched it. We all were there. At least, everyone should have watched it/been there. It involves the question of love. Seth Cohen, a previously friendless nerd (which actually makes no sense considering how cool he is in the show…another blog post) living in the glamorous Orange County town of Newport, is caught in a love triangle between Summer (no last name needed) and Anna Stern. However, the answer to this dilemma is extremely obvious.

As Seth says above, “It’s always been you Summer.” Do you believe in love? Do you have emotion?  Are you a sensible person? If you answered yes to one or more of the past three questions, then it’s clear, beyond a reasonable doubt, why Seth not only made the correct choice by choosing Summer over Anna, but also that there really was no choice.  Doesn’t time spent pining, wanting and yearning inspire the fieriest desire?  Gatsby thought about Daisy every minute for five years. Think about that. Would he have been dissuaded by some bimbo with a cute smile and a personality similar to his own?  Of course not, and neither is Seth. You know it’s love when only one person matters.  Summer has been the object of Seth’s affection for time immemorial. He even named his boat the Summer Breeze, despite having barely exchanged words with her.

It’s always been you, Summer.

The first minute of the above clip displays Seth’s lifelong love for Summer. He recalls a poem she was nervous about reciting in sixth grade.  Summer, realizing how much Seth must care about her, kisses him. Why Summer? Ladies and Gentlemen of the jury, this is clearly the love of Seth’s life, someone he’s already devoted himself to.  Shouldn’t he aim for the stars? Isn’t this America, where you don’t settle for second best? What did Gatsby do first: Give up on his dream, or die?

The only reason one might choose Anna over Summer would be if Anna treats Seth better or would be a better fit as a girlfriend. Fortunately, both of these rationalizations are unfounded and poorly thought out.  Also, it’s high school.  Practicality doesn’t matter yet. Anna has the qualities Seth might want in a wife or serious relationship down the road because of their compatibility BUT, again, it’s high school, the here and now, and Summer is exactly what you want in a high-school girlfriend.  That is, she’s the hottest thing you’ve ever seen with sass to back up that ass.

Summer dressed up as Wonder Woman for Chrismukkah. Need I say more??? Did Anna??? No.  Anna wrote him a comic book.  A sweet gesture, but completely void of sex.  Summer doesn’t know anything about comic books, but she embodies the fantasy.  Every man, especially a comic book lover, has a list of two fantasies that trump the rest.  In the second, Cat Woman is held up by her tail.  The first involves Wonder Woman, a jet-pack, and soundproof walls.  The takeaway from this episode: Anna writes books, Summer is the girl the book is written about.

So far Seth’s love for Summer has been proven repeatedly.  What about Summer’s love for Seth?  Isn’t true love mutual?

Ladies and Gentlemen of the jury, Summer loves Seth.  This statement is evidenced by the “Countdown” episode (overall a great episode as well).  On New Year’s Eve, even though Anna is with Seth, Summer can’t get over him. At 2:25 of the clip above, Summer is giving a New Year’s kiss to a more attractive guy than Seth. However, she famously scoffs, “you’re not Seth Cohen” at 2:28 and pulls away. Just as Summer is the girl of Seth’s dreams, Seth is the man of Summer’s, the same way Han is the man of Leah’s.

This leaves out Anna. She doesn’t bring anything original to the table. She is confident and cool, but she is literally a female version of Seth. They even dress similarly, as pointed out by Summer in the “Links” episode.  When Anna and Seth are together, Summer cunningly says, “You guys are like brother and sister.”  Not what a couple wants to hear.  Further, Anna uses grammar in a way that pisses me off.  Anna, you are anathema to me, fucker.

Robin Williams’ character Sean Maguire in Good Will Hunting discusses love at length. One powerful statement he makes is that one does not experience loss unless “you’ve loved something more than you love yourself.” I’ve used this to define love ever since—that love is loving something more than yourself. In this case, Seth and Summer obviously love each other.  Seth more clearly with his memorizations and devotion, but Summer also in the selflessness required for a cool girl to date a nerd. People that show true love for one another should be together.

Two more videos, just because they make me cry.

Summer, it’s you.  It’s always been you

Summer, it’s you.  It’s always been you. 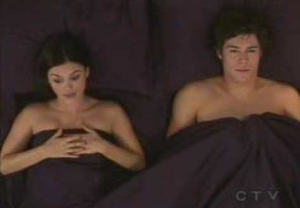