I am supremely jealous of a 64-year-old French man named Philippe Petit. He did something incredible and became famous and well loved. But that’s not why I’m jealous. I’m jealous because he found one, single thing- a dream- and he poured his entire self into it, without reservation. He didn’t hedge his bets- he went all in, literally putting his life on the line.

In 1974, on the eve of his 25th birthday, Philippe Petit committed “the artistic crime of the century.” Carrying a 50-pound, 26-foot balancing pole, he walked from one of the newly completed World Trade Towers to the other. At 1,368 feet, he looked down to the ground, and he laughed. He jumped, he lay down, he spoke to a seagull, and he kneeled, saluting the clouds. He called it “the coup.”

Philippe is and was a human meteor; he is one of Kerouac’s infamous “mad ones.” Philippe is not a stuntman, nor a circus performer, nor simply an artist. He is a monomaniacal dreamer. And in August ‘74 he was dead-smack in the middle of his 20s. He made the choice to be great- to be large, bigger even than the tallest buildings in the world. As the star of their own play, people want to be significant. The questions we struggle with during this decade are broad and frightening to confront. “What do I want?” “Can I capture greatness?” “What am I willing to do, in order to grow?” Philippe’s answer is clear:

Life should be lived on the edge of life. You have to exercise rebellion: to refuse to tape yourself to rules, to refuse your own success, to refuse to repeat yourself, to see every day, every year, every idea as a true challenge – and then you are going to live your life on a tightrope.

To hear him tell it, the story of Philippe’s obsession with the towers was almost comical in its simplicity. His decision, pursuit, and conquest were straightforward. At 17, he went to the dentist with a toothache. In a magazine, he saw an artist’s depiction of the future towers-to-be. With a pen, he drew a line at the top, from one to the other. Enthralled by this image, he skipped the appointment, ripped out the picture, hopped on his unicycle, and peddled home. Then he practiced and planned for six years. He walked in the air above Notre Dame. He went to New York and spied on the towers, pretending to interview workers on the top for a French magazine. He enlisted accomplices. Then he and a group of helpers broke in, climbed the stairs to the top, and at night they strung a cable across the chasm using a bow and arrow and some fishing line. At 7:15 AM on August 7th, he stepped off the steel beam and onto the wire, where he stayed for 45 minutes.

It seems there are three kinds of people. The first kind trudge along, avoiding choices, freedom, risk. They start digging their own graves at age 20. Thoreau called these “lives of quiet desperation.” The second kind of people takes a buckshot approach. Spraying shots everywhere, hoping to knock a few options out of the sky, they count on them leading someplace interesting. The third kind is Philippe.

Walking on a wire requires a meditative, absolute focus. You must exist solely in the moment, in the act of balancing. When he left the dentist’s office, Philippe knew that he had captured and now possessed his dream. He brought his focus to the coup. And he did it. He chose to do something that was impossible, and he did it.

By choosing to attempt something beyond the realm of imagination, Philippe became bigger than any person has a right to be. His passion and hope for the coup consumed those around him. He drew in others, who risked imprisonment for helping him. His joyful disregard of the rules, of the laws of people and the laws of physics had a magnetic effect on others. When they watched Philippe dancing in the air, they saw the most wild, willful, and exuberant parts of themselves. But when he saluted, the conquest was his alone.

He stepped off the rope and shed his friends. The others’ role in his life had been played, and they knew it. They had attached themselves to Philippe’s desire. Once his passion was realized, they each went home, owning a small piece of it. But they had no relationship to the new Philippe. They had been attached to his obsession, but not to his enduring self. Philippe was lucky, in a way. For a time, he had a single dream. He was undistracted and unencumbered, as those around him asked for nothing in return but to see him victorious. He became his own desire, and once it was fulfilled, he stepped back onto the roof a new man, baptized in the sky.

What happened afterwards? The film Man On Wire gives no hints as to the next 30 years of Philippe’s life. But he has done other walks—incredible feats of concentration and physical skill. Nor does he say why he tried the coup in the first place. He definitely wanted to break some rules. And he enjoyed the resulting fame, dropping his girlfriend and falling into the arms of the nearest woman for days on end. He says that, when he sees three oranges, he juggles. When he sees two towers, he walks. He did it just to do it. He turned into a dream of himself, into an idea, a consuming urge. Only ideas can be eternal. And, in his moment of consummation, so did he. 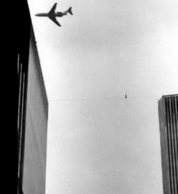 Philippe has lived every day of his life “on the edge of life.” When he saluted the clouds, he conquered the biggest thing mankind could offer. At the same time, he conquered the Earth and the sky. Was he mocking the universe? Or was he just playing like an exuberant child who finally got what he had wished for? Do I want to be like Philippe? I don’t want to be one of the people on the ground, looking up. I don’t want to be one of his friends, stringing the cable for him. But I do want to be that perfect achievement of an absolute, consuming desire. But first I need to find my dream. I’m currently looking for it in Eastern Morocco. Perhaps writing for this blog will help me to find it.